The Magic of Same-Space Exits in Bitsy

This post assumes a basic familiarity with the Bitsy Game Maker.

Since the release of Bitsy 7.0 I’ve been looking for interesting ways to use the new exit dialogs. Today I’m here to talk about the magic of same-space exits, how I used them in Ghost Ship Fishing Trip, and how you could use them in your next bitsy project!

What is a same-space exit? 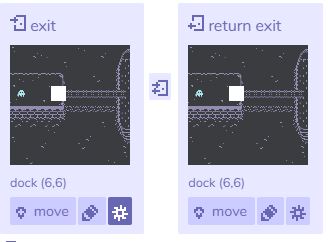 A same-space exit is an exit that leads to the same space in the same room from which it leaves. Sounds pretty pointless when I write it out like that, but hear me out!

Previously (in bitsy 6.5 and below) if you wanted some magic text to display as the player walked across a space you would have to create a blank item and place it in your room. This was a neat little trick, but it had plenty of issues…

I have been working on a non-bitsy game about fishing, so when the monthly Bitsy Game Jam theme turned out to be something that I could interpret as water-based… I knew I just had to have fishing in bitsy! I wanted it to look good, be repeatable, have some explaining text, and not have any player-tile overlap if possible.

I tried a few things with sprite-based fishing poles, but it never looked quite right. I made the decision early in the project that only the ghosts would use the item/sprite color. This meant that a sprite-based pole was out.

I eventually settled on a two-exit system that utilized (also new in Bitsy 7.0) conditional exits.

The first exit would check if the player had obtained a fishing pole. If they had they would be taken to the bitsy room that had a fishing pole in their chosen location. If the player did not yet have a fishing pole, there would be some text explaining how to get one and the player would… well… the game would need to not only not allow the player through the exit, but also not allow them into the space with the exit. I discovered that I could chain an exit-from-dialog command (also new in 7.0) before an exit lock to keep the player from moving at all (we’ll come back to this).

The second exit of the fishing system was inside the “pole room”. Using a similar chain of exit-from-dialog commands and exit locks, the player would have to “lean into” the fishing pole to prompt the fishing text while staying in the same square.

The fish-catching system inside that second exit used a bitsy variable that was set by a shuffle list. If the variable had a certain result, the player would catch a “BIG ONE”, otherwise they would catch a regular fish. 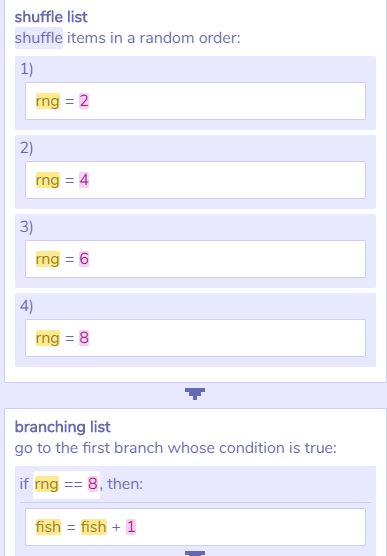 Other Uses for Same-Space Exits?

We’ve already talked about using same-space exits for hidden dialog and interactive scenery (like fishing!)… But what about just setting variables?

These exits could be used like “hidden” checkpoints, noting player progression by setting variables based on which spaces a player has visited. Similarly they could be used to tally how far a player has walked (think hatching an egg in Pokémon games).

I found a semi-interesting way to use this hidden variable setting in Ghost Ship Fishing Trip by making directional tile walls. It bothered me (for some reason) that players could walk into the stairs leading between decks from any angle. It felt weird to see the avatar just “hop the rail” of the stairs. The stairs themselves have an exit with a conditional lock that only allows the player through if they have a certain variable set. I placed hidden same-space exits around the stairs with some setting the var to a truthy value and others setting it to a falsy value. This creates a tile that can only be entered from a certain angle. 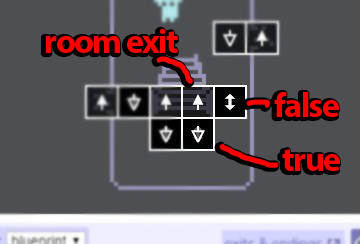 I’m sure there are plenty of ways to use same-space exits that I haven’t listed here. Thank you for reading this far and I hope you learned something or were inspired in some way. Make sure to let me know if you come up with any other neat exit tricks!

If you’re looking for some more basic tips and tricks be sure to check out my Bitsy Cheatsheet!

A short bitsy game about relaxing and fishing as a ghost.